Ionic Vs React Native Vs Xamarin : Which is the best Hybrid platform for Mobile app development

The first computer programming language was Plankalkül, which was introduced somewhere between 1943 and 1945. Since then these high-level programming languages have been evolving and filtering out the complexities that made it tedious for the user and developer to use or develop with ease. There was a need for bringing about a high degree of enhanced user experience, which these high-level languages often failed to provide.

All kinds of Android apps are programmed using Java, while iOS apps are programmed using Objective-C and Swift programming. However, there are a variety of other tools that can also be used for the development processes of these apps. Some of the tools that can be used include Ionic, Xamarin and React Ionic. All of them are preferred by developers for the process. But, since all are best, there should be the one that will exhibit greater features than the others and help us distinguish between each as to which is better.

Let us take a look at what makes them different from one another. 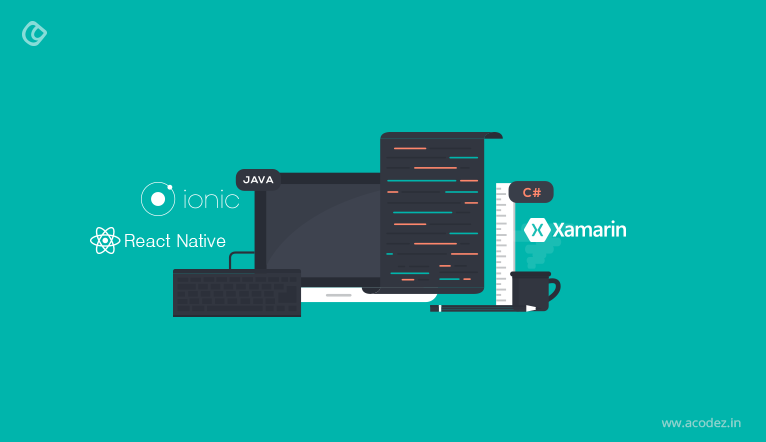 Both Ionic and React Native are built on Typescript or Javascript, while Xamarin is developed on a C# framework. Xamarin provides a variety of ways in which it can be implemented. You can reserve as far as possible, while it is possible to migrate over to the C# language. The process is that when you design storyboards, Android layout files or XIBs using Xamarin Studio tools, you are facilitated with the provision of code in C#. You cannot use Swift or Java here. You can design storyboards and iOS XIBs using Xcode. This also provides intuitive access to frameworks. But, this code doesn’t entirely depend on UI and thus it can be split among both Android and iOS apps. You can snap Xamarin platforms to utilize the power of Xamarin in its true form. This even provides you with forms that can be used for developing UIs for two different platforms simultaneously.

Let us take a look at how Ionic and React Native that applies Javascript frameworks differs from Xamarin.

The fact is that, in the case of React Native, you would find that it is almost similar to Xamarin. Here, a unique templating language will be implemented to create the GUI, which ultimately ends up generating native widgets. But, Ionic doesn’t need any native widgets as it exhibits a web page that is displayed in HTML, which imitates the native widgets design.

In fact, React Native implements a native approach, where you are allowed to declare UI as a function for the present state. Now, React Native can track the modified part of the update of each state of UI and then, redraw these. Whenever there are complex layouts, you can further simplify these as the UI state updates do not spread across the code at all.

Every framework has a varying approach. 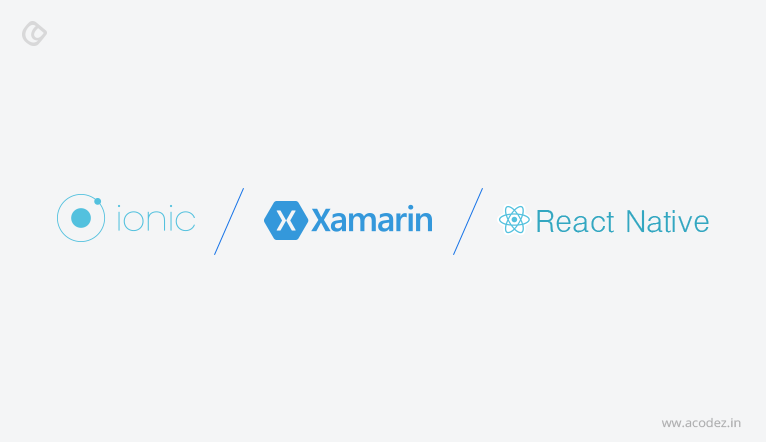 Let us see how the various aspects of an app development process differ for each device. Let us check out how this applies to iOS and Android, though Windows phone also falls into this category.

The worst part of this is that you will require writing the code more than once. Depending on the kind of programming languages, regardless of whether it is Swift or Java, that have been implemented in the process, you get different ways to generate the GUI (it will not be an easy task to write the same code more than once). The worst situation is when two different developers set to create the Android and iOS apps as they have different styles, however, closely they collaborate for the process.

Ionic, React Native and Xamarin takes care of this disadvantage by providing strength tools, which helps in accomplishing a goal – in order to use the single stack of technologies to generate both Android and iOS apps. This idea is interesting, but here are a few things that happen in the background:

As we discussed, the developer needn’t be aware of two different technologies. Here, they do not need to rewrite the app in both languages or design the GUI using various tools though they should be aware of the restrictions on the features of the platform.

There is a lot of reduplication that happens because of the shared code base. There is a possibility that you can split the common code for applications, including networking and business intelligence, which can be further split into various modules and you can implement this for creating customized UIs for these platforms so that these exhibit platform-centric parameters.

It is better to have developers or designers who are well-versed in the process irrespective of the programming languages that they are implementing in the process. While they are very proficient in the specific programming languages, they are also comfortable at handling the other languages – if the iOS programmer can develop great iOS apps, they are also capable of developing android apps too, while Android developers are capable of vice-versa.

Let us find out what could be the shortcomings of all these features:

One of the most common problems experienced is during the development of cross-platform mobile apps. The first and foremost thing is that your choice of libraries is restricted to very few. Since there came a common connection for the networking layer for both the Android and iOS, you are allowed to use certainly selected libraries, while you are not allowed to connect iOS or android-only libraries for this purpose. Here, the one thing that you can do is to include C# libraries that have been built to deal with this concern, though you cannot find any exact solution to deal with a situation when a particular feature has been borrowed from either of the one’s libraries.

There could be discrepancies when using platform-specific code. When the reduplication of intelligence interferes with the possible discrepancies from occurring, we cannot ensure that the UX process would be a smooth and efficient one. Sometimes, because of the difference in the OS, it is necessary that we repeat certain functionalities for both platforms. The sets of permissions for both Android and iOS differ, even though the C# libraries try to bridge both the platforms by connecting these to one interface. This is accomplished by coding for both platforms, considering the differences and features that coexist.

We can implement code reduplication to prevent major discrepancies, though the loopholes in certain minor areas still remain. Care should be taken to ensure when the code is rewritten the second time to avoid other kinds of flaws or errors.

Let us find out further how the three tools differ from one another: 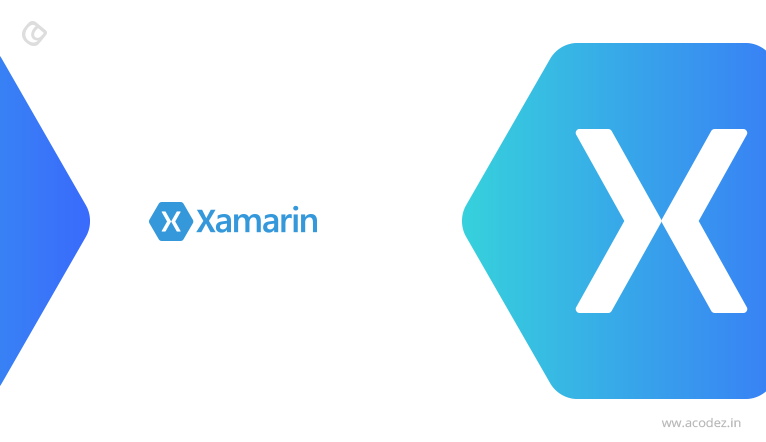 It is easier to compile C# with either JIT or AOT. When this is being designed for iOS, it is not possible to get it complied with JIT as it complies with AOT by default. With Android, we will find that such problems do not exist as it can be implemented with both JIT and AOT. Though code compiled with AOT is capable of executing faster, it has got some restrictions, such as no dynamic code generation. The 64-bit support doesn’t become a concern when using Xamarin and you can even force it to compile for 32-bit as well. 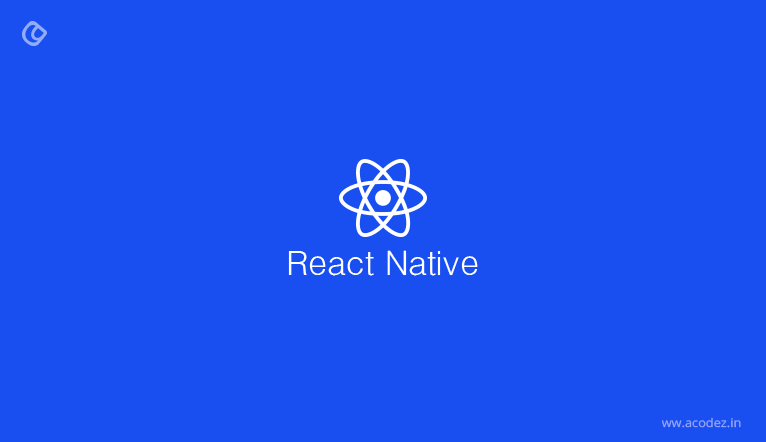 The same rule applies here too as it unable to find a substitution for compiling with JIT on iOS and is unable to interpret Javascript code as well. It runs of the core JavaScript on the internal side – powered by the iOS. The same can be used on Android too, but you can make JIT compilations on android too. The 64-bit is not available on Android during the coding process though it is assumed to be present on iOS.

With React Native, you can customize XML syntaxes for introducing the custom stylesheets and UI as well. The embedded format can be found in the code. 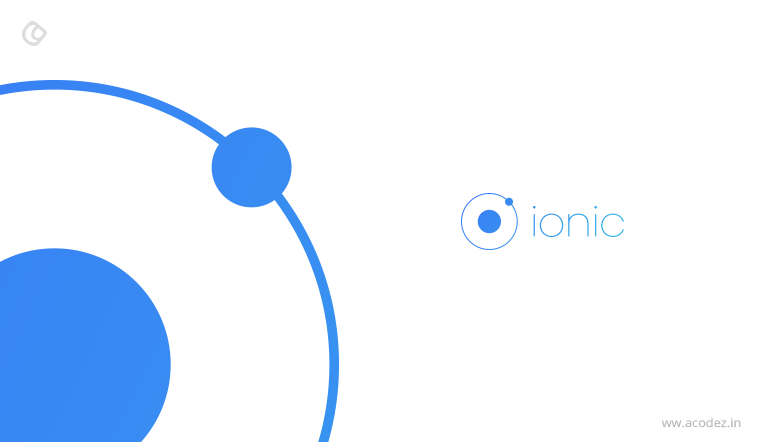 On the basis of the differences and features, and your requirements, it is suggested that you choose either of them, though each of them has a set of unique and exemplary features. We would recommend all the three for your needs.

Need assistance with developing apps for the website or mobile devices? Regardless of whatever you wish to develop, we can provide you with assistance.

Acodez is a leading mobile app development company in India offering all kinds of app development services to our clients in India and abroad. We are also an SEO agency offering all kinds of digital marketing services to our clients to take their business to the next level. Our highly experienced engineering team possess hands-on experience in building large and complex web applications due to which we’re also considered one of the leading web application development companies in India with clients across 70+ countries. 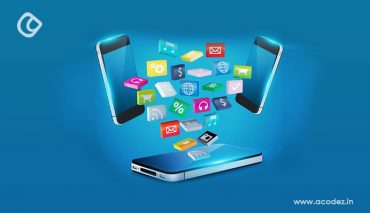 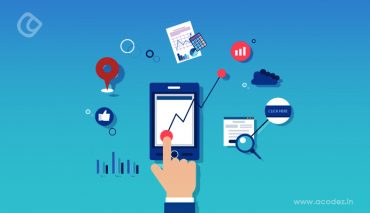 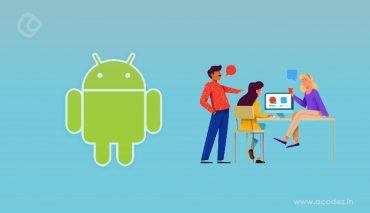