Personal and professional growth often requires a healthy amount of self-criticism. This type of self-criticism is essential for coding because it entails scanning and eliminating unproductive or counterproductive patterns in your web process. It is for this reason that every programmer should have a thorough understanding of anti-patterns.

The following are 23 anti-patterns that you must avoid if your web development process is to remain productive:

Spaghetti code is a type of coding that is difficult to read and follow. It is often characterized by complex logic and lots of nested loops and conditional statements. As a result, it can be challenging to modify and maintain. If developers are afraid to work on a project then it’s highly unlikely that anything will ever get done, which will lead to lots of problems down the road in terms of deadlines and unneeded pressure.

Premature optimization is the act of optimizing code before it is necessary. It is when you spend too much time focusing on small things like the performance instead of actually finishing your job (writing the actual application). When this happens it’s often seen as wasted time by other developers who might not understand why you’re optimizing something that doesn’t really need it.

This can often lead to bigger problems down the road as the project evolves. While it may seem like a good idea in the short term, it often leads to poorer performance and more complicated code in the long run.

The Golden Hammer antipattern refers to the tendency to rely too heavily on a single technique or tool, instead of using a variety of tools that would be more appropriate for the task at hand. This can lead to serious performance and maintenance issues.

The Reinvent the wheel antipattern is a literal example of trying to recreate something that already exists instead of reusing it. This can lead to multiple instances of the same type of app, buggy code, performance problems, and so on.

The Boat Anchor antipattern occurs when someone tries to use an overly complex or over-engineered solution in place of a simpler one that would have worked just as well or better in the first place. It refers to spending too much time making something complicated when all you really needed was a basic table anchor for your boat – hence “boat anchor.”

Often this kind of solution is made complicated either by trying to solve too many problems at once or by making it overly large and complicated so that it solves a simple problem in a complicated way.

A dependency shell is an example of what can happen when you start carrying around excess baggage. It refers to including extra dependencies without really needing them just because someone else needs them for the same project. This often leads to increased file size, bloated packages, additional testing, etc., which can make updates difficult or even impossible later on.

Sometimes programmers leave code behind that no longer has any function in the current program but was never removed. This is referred to as dead code. While this might not be problematic if it’s only a single statement, dead code can eventually lead to significant performance issues.

Permutation antipattern is when you select an approach that works in one instance but fails when used elsewhere due to changing variables or conditions. For example, if there are 10 items to be displayed on a web page and you always use the same HTML element (say, <div>) for all 10 of them rather than specifying different elements depending on the content, it will work fine until someone requests 11 items instead of 10 or 12 items instead of 11.

It’s helpful to keep this pattern in mind whenever you see your code-breaking down unexpectedly because something has changed.

What happens when people design objects or classes that are too large and complex and are responsible for too many tasks? This can lead to something known as the “God Object” or “God Class.” These overly-complex objects tend to be difficult to understand, modify, and work with. They tend to be a ticking time bomb, waiting to cause all sorts of problems down the road.

Copy and paste programming is a type of coding that occurs when you copy and paste code from one part of your program to another without really understanding what it does or even the basics of programming. This can easily lead to errors, and it makes modifying the code much more difficult.

The Proliferation of Code antipattern can be summed up with the phrase “too many cooks spoil the broth.” It occurs when there are too many people working on the same codebase, leading to inconsistency, confusion, and overall chaos. This can be a particular problem in larger organizations where different teams might be working on different parts of the code without talking to each other.

The Cargo-Cult programming antipattern is a type of coding that happens when you adhere to coding practices or patterns that don’t actually make sense or work well. It’s often based on copying what someone else has done without really understanding why it

works (or doesn’t work) the way it does. As you might imagine, this can lead to all sorts of problems down the road.

The Lava Flow antipattern is what happens when you have too many changes happening in your codebase at the same time. This can lead to a situation where it’s difficult to track down the source of a problem, or where different parts of the program are no longer working harmoniously together. It can be a real mess to clean up.

The Hard coding antipattern is essentially the opposite of soft coding. With hard coding, you take a specific value and insert it into your codebase, rather than allowing the code to determine the value automatically. This can often lead to problems down the road if that value needs to be changed for some reason.

The Soft coding antipattern is a type of programming that occurs when you use variables rather than hard-coding specific values into your code. This allows the code to determine the value automatically, which makes it easier to change if necessary. It can also help to make your code more readable and maintainable.

The Error hiding and Exception swallowing antipatterns are two related coding problems that can cause big headaches down the road. With error hiding, you try to hide errors from the user by displaying a friendly message instead of the actual error code. This can be helpful in some cases, but it’s not a good solution for long-term stability.

Exception swallowing is when you catch an exception and then do nothing with it, essentially “swallowing” it and pretending like it never happened. This can also lead to all sorts of problems down the road.

The Fear of Adding Classes antipattern is a common problem that can lead to all sorts of issues in your codebase. It happens when you have a large codebase with no logical organization to it, and one of the many side effects is that adding classes becomes difficult because of the lack of structure.

The Inner-Platform Effect occurs when you use a platform or programming language for reasons other than its core features or benefits. For example, if you’re using a new programming language simply because everyone else is using it, this would be a case of the inner-platform effect. It can lead to problems down the road as your program evolves and needs to be changed.

The Management by Numbers antipattern is what happens when managers rely too much on quantitative rather than understanding how the software works. For example, if a manager looked at your code and found that it’s taking an average of five minutes to process a request, they might push you to increase the speed by 50% in order to cut down on the time taken. This is an oversimplification of how algorithms work and could cause all sorts of problems down the road.

The Poltergeist antipattern is when you add unnecessary classes or components to your project without really realizing it. This can be much worse than spaghetti code because up until now everything seemed fine so there were no red flags for anyone working on the project. Suddenly one day someone realizes that there’s an extra class cluttering things up, and they’re going to have a lot of work ahead of them before the project is back to normal.

The Bikeshedding antipattern is when you spend way too much time discussing relatively trivial things instead of actually writing code or doing your job. It’s a common distraction that can often lead to unneeded meetings, delays, and problems throughout the software development process.

The Analysis Paralysis antipattern happens when you tend to over-analyze small problems rather than move on with your work. This can cause huge amounts of delay in terms of progress, plus it makes it difficult for people working on the project because they don’t know what you’re thinking most of the time.

The Magic Numbers and Strings antipattern can often lead to problems down the road if you’re not careful about what you put in your code. The problem is that when you use a number or string in your code, it doesn’t always make sense for everyone who might look at it later on.

For example, say you have a line of code that says:   << “Hello world!” >>  and then two months down the road you come back and try to read through the rest of the program but can’t figure out why this single line looks like gibberish (because another developer has since changed things). It’s usually better to declare constants rather than write magic numbers or strings because it can be much easier to read.

As you can see, there are a number of different coding antipatterns that you need to watch out for. By understanding what they are and how to avoid them, you can help keep your codebase clean, consistent, and easy to work with.

If you’re looking for the best companies in the Web development India arena, Acodez is definitely one among those. Acodez is a multi-award-winning web development agency with 10+ years of experience and clients across 80+ countries. This, in turn, has helped the organizations get better returns on their investment. Acodez is also one of the best digital marketing agencies in India We are also a leading digital marketing agency in India, providing SEO, SMM, SEM and Inbound marketing service at affordable prices. For further information, please contact us!

View all blogs
How Mobile Apps Are Revolutionizing the Future of E-Learning Why Low-Code and No-Code are considered as the Future of Application Development Google Ads Conversion Rates by Industry: How Do You Compare? 12 Customer Experience (CX) Trends In 2022 What Is the Difference Between Exit Rate and Bounce Rate and How to Improve Your Content Strategy Using These?
Get Facebook help to locate the best Professional Services in your local area with this hidden tool! 12 Best Software Development Methodologies with Pros and Cons Scope of Web Designing in 2016 – Past, Present and Future 15 Top Reasons to Choose PHP over ASP.Net Best PHP Frameworks For Web Development in 2021

The Importance of Documentation in Web Development 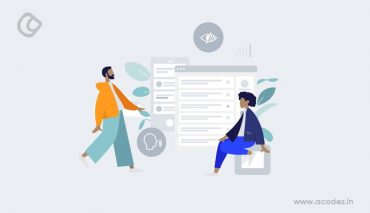 16 Tips for Web Designers To Provide People With Accessibility Needs